By Ben Moyer For the Herald-Standard, orginally published Oct 19, 2018

Local governments face diverse challenges and limited funding, but are still expected to provide infrastructure, public safety and a quality environment for residents. Wharton Township, Fayette County, found itself in such a dilemma with a culvert that carried Big Sandy Creek under Fayette Springs Road about three-quarters of a mile south of Rte. 40 at Chalk Hill.

“Any sizeable rain caused a flood there, and in one bad event the old culvert collapsed under the strain over a weekend,” said Jim Stanton, vice-president for engineering at McMillen Engineering in Uniontown. “The township made an emergency decision to quickly install a new larger culvert because bus traffic was a main concern. It’s a 5-mile detour if buses or fire trucks can’t cross there.”

Even that larger structure did not correct the flooding. It continued to clog or was simply overwhelmed by high flows.

But a feature of that culvert turned out to be the catalyst for a permanent solution. As installed, the culvert was “perched,” meaning the downstream end of the discharge pipe was about a foot higher than the receiving stream, resulting in a waterfall.

Photo Below: This culvert installed by Wharton Township last summer remedies a chronic flooding problem on Fayette Springs Road, and allows trout and other stream organisms to pass freely upstream. 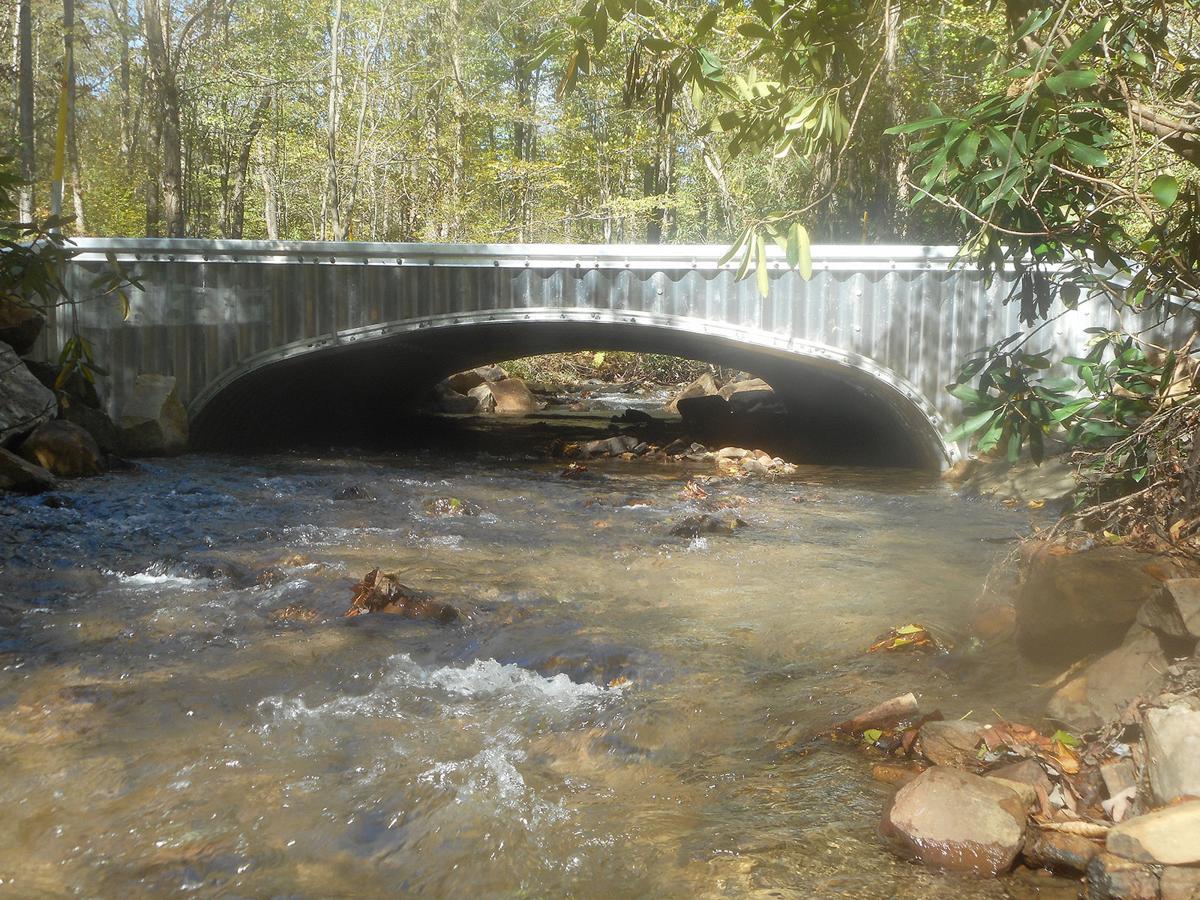 Once, such a detail would have gone uncorrected — even unnoticed. But perched culverts present a barrier to fish, insects and other aquatic life moving upstream. And a growing body of research shows the importance of free passage for trout and other organisms. For example, researchers at Penn State captured hundreds of wild brook trout in headwaters of Loyalsock Creek in Lycoming County. They fitted the fish with radio-transmitters and tracked their movements. Researchers noted that free trout movement is important because fish can find new locations that offer a refuge if some force, like flood, drought or a sudden pollution event, causes negative change in the original habitat. Brook trout are known to inhabit Big Sandy and tributaries but could not move upstream beyond the Fayette Springs culvert.

Members of the Chestnut Ridge Chapter of Trout Unlimited (CRTU) approached the township and suggested that since high flows continued to flood the culvert, the township might consider seeking a way to cure both the flooding danger and simultaneously correct the perched culvert so that aquatic life could pass upstream.

The township explored several alternatives, but none promised to be effective, despite a high estimated price for the township’s budget.

Late in 2017 the Fayette County Conservation District learned of the township’s interest in remedying both the flooding and the obstruction to fish. Conservation district representatives visited the site and advised the township that such a fix would be eligible for funding through the State Conservation Commission’s Low-volume Paved Road program, an outgrowth of the Dirt and Gravel Road program aimed at reducing sedimentation into streams from rural dirt roads.

Photo Below: An excavator machine prepares the Big Sandy Creek streambed for placement of pre-fabricated steel footers to cradle the concrete foundation of an open-bottom, fish-passable culvert under Fayette Springs Road in Wharton Township. 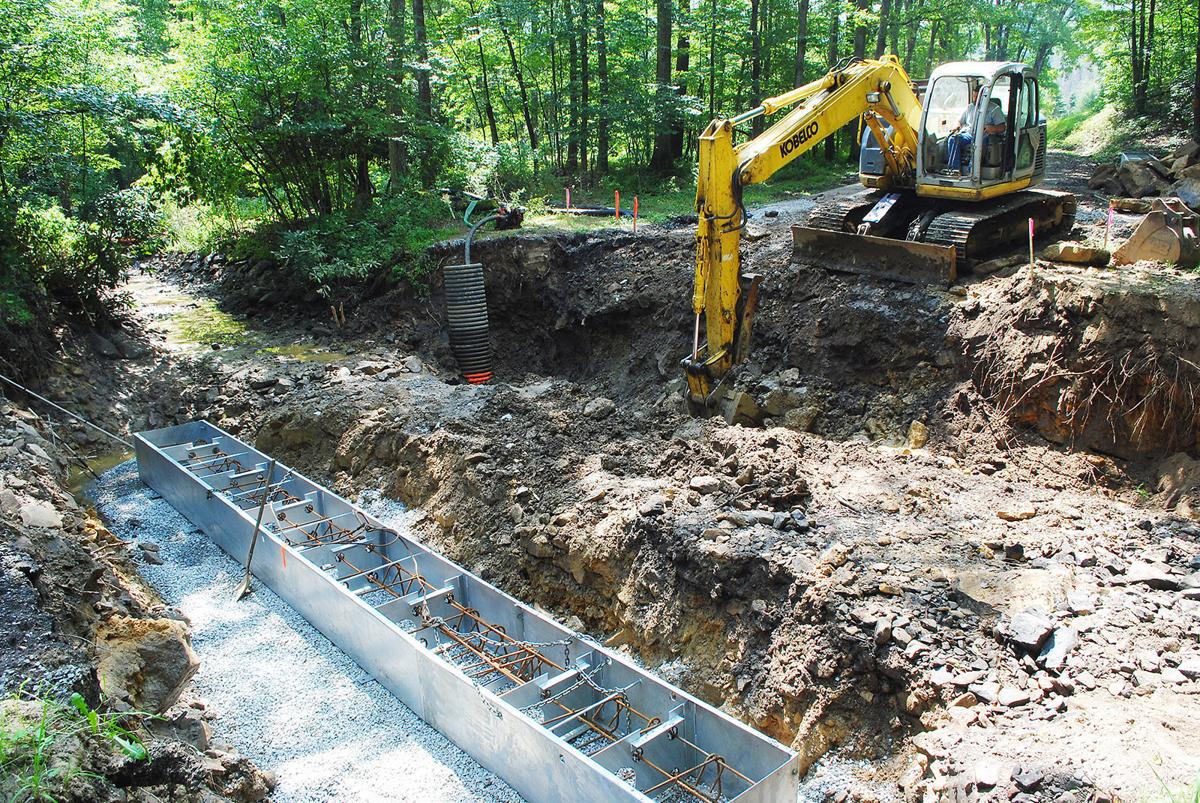 The township did a traffic count and documented that fewer than 500 vehicles per day use Fayette Springs Road, making a fish-passable culvert replacement there eligible for state Low-volume Paved Road funding.

McMillen Engineering then informed the township of a newly available, arched culvert, manufactured in Kentucky, that would span the entire stream while open on the bottom, passable by fish and other organisms. McMillen helped the township acquire a permit from DEP for that concept and engineered the site. The township built a temporary coffer dam and pumped the stream around the construction site. Installation was completed in August.

“This is the first stream-crossing of this type to be installed in Pennsylvania,” Stanton said. “It’s a new approach using pre-fabricated steel forms for the concrete footers, and a pre-fabricated arch. Its benefits are many, including that the time is minimized when the trench is exposed to erosion.

“The township did a lot of the work themselves to reduce the cost,” Stanton continued. “They used all their own personnel to thread and tighten 3,000 bolts that hold it all together. But they didn’t have a piece of equipment big enough to set the culvert, so Lee’s Plumbing (New Salem) provided the required equipment and operator.”

Total cost of the project was $120,000, of which the Low-volume Paved Road program paid $92,000. Much of the rest was in Wharton Township’s time and labor.

Fayette Springs Road has not flooded since the fish-passable culvert was placed, despite several intense storms.

“[The culvert] weathered the storm without incident. After one storm soon after installation there was only a foot of freeboard to the top of the culvert, then two feet to the top of the road surface. The county was putting out a list of flood-closed roads, but Fayette Springs was not on it and we are all proud of that,” Stanton said.

“Barriers like the old culvert, and many more like it around the region and state, limit trout access to cold water refuge and spawning grounds, thus jeopardizing their survival, “said Dale Kotowski, CRTU president. “The Chestnut Ridge Chapter of Trout Unlimited wishes to thank Wharton Township, the Fayette County Conservation District and all involved partners for their forward-thinking and hard work in eliminating this barrier on Big Sandy Creek.”

Stanton agreed and elaborated on the township’s effort.

“The Wharton Township supervisors recognize that in Fayette County one of our biggest assets is outdoor recreation and tourism, which includes trout fishing. It’s a resource for the township, so anything they do to preserve the native brook trout for generations to come is part of their economy of the future,” Stanton said.

“I’m a trout fisherman myself, with a lifetime license,” said supervisor Lewis. “We’ve worked together with Trout Unlimited on other projects for many years, and the Fayette Conservation District, McMillen Engineering and Lees Plumbing were all a tremendous help. Everyone involved was excited to get this permanently fixed, and to fix it the right way.”